The basic principle behind photosynthesis is fairly well understood. That manipulation of the narrow band of visible frequencies on the vast electromagnetic spectrum. The illustration below shows us a basic understanding of the process of photosynthesis.

Photosynthesis is a biochemical process in which plants, algae, and some bacteria harness light energy to produce food. Almost all living things depend on energy produced from photosynthesis for their nourishment, making it vital to life on Earth. It also produces a large portion of the oxygen for Earth’s atmosphere.

Light Quality refers to the quantity and quality of color, or wavelength, of light that’s emitted from any light source. Sunlight contains the full spectrum, or wavelengths, of light that plants need to complete photosynthesis. The standard prism will break the spectrum of color from the sun into bands of violet, indigo, blue, green, yellow, orange, and red. Plants use all colors of the light spectrum, however blue and red are the two primary colors necessary to complete the energy conversion. The amount of blue and red light within a light source will affect plant growth in different ways. The illustration below shows us a basic breakdown of how the different wavelengths effect plant growth. 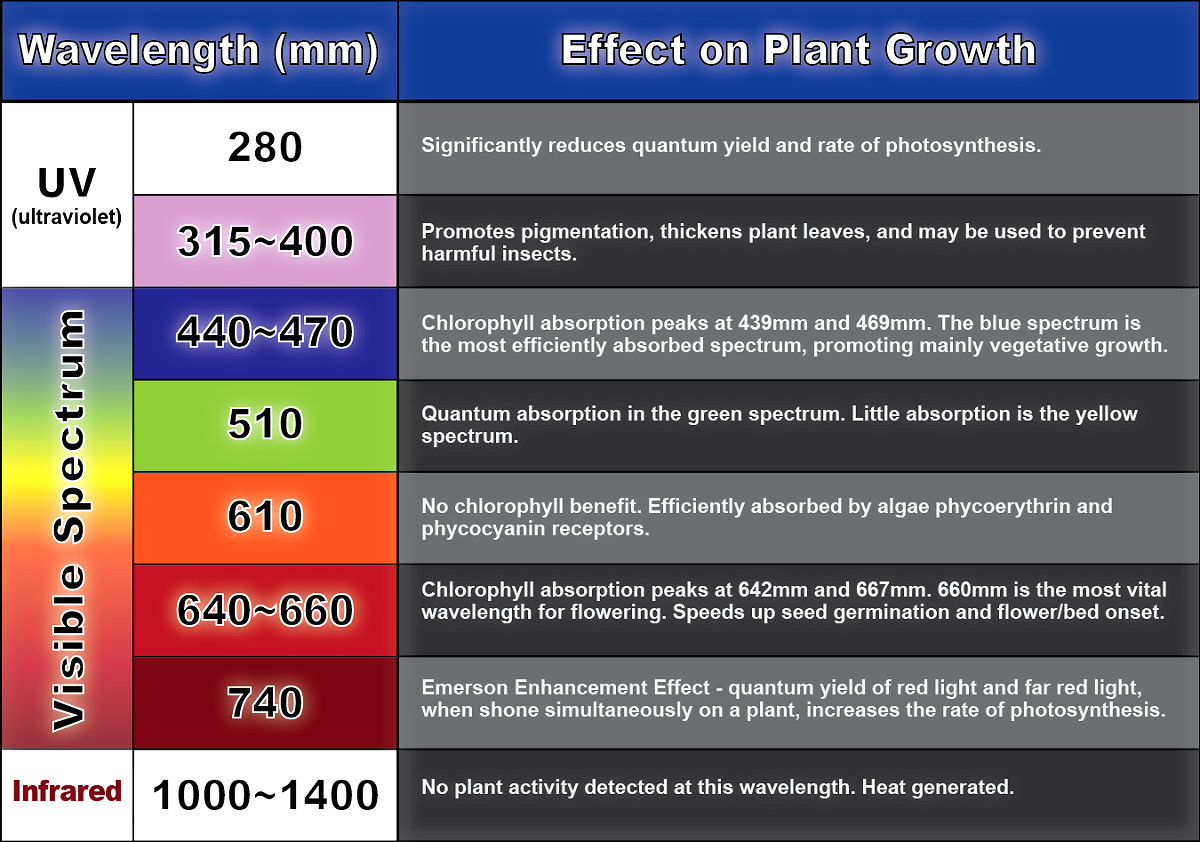 There are other factors that play a role in the rate of this process as well. For example, temperature determines the rate of photosynthesis and the nutritional status of the plant affects light harvesting. Leaf area and plant pigments such as chlorophyll determine how much light can be intercepted and stomata apertures influence the flow of CO2 into the leaf. Just to complicate matters even more, the internal flow of water required for photosynthesis into the leaf can be affected by drought, root damage and other factors, while CO2 levels directly around the leaf surface can be affected by airflow and the use of CO2 enrichment like the use of a grow tube or tree tube.

The majority of grow tube colors on the market today decrease the blue light available to plants in early stages of biological transition and focus on red and far-red light. By allowing a quantum yield of red and far-red light simultaneously also known as the Emerson Enhancement Effect, will certainly increase the rate of photosynthesis and accelerate growth in the form of height, but root mass and caliper will most likely be sacrificed thereby possibly causing etiolation (thin, elongated trunks).

Growing a tall tree or vine in a short amount of time is not necessarily a successful planting. The reality is that a tall plant does little good if it has an inferior root system. Yes, accelerated growth rates are desired, but not at the expense of a weak stem and root mass that are unable to support the plant. In many cases, stem and root mass will need an extended amount time to catch up to the tree or vine’s height if it ever does! The biological transition of a newly planted tree or vines roots into the surrounding soil and the effects thereafter can change the growth pattern of a tree or vine’s entire life cycle.

As mentioned above there are many factors involved, but lack of sunlight along with blue light not being able to penetrate the grow tube wall can be one of the main reasons for these issues.  This is mainly due to the tree or vine expelling the majority of its energy and resources trying to reach the brightest blue light at the top of the tube instead of allowing enough blue light to pass through the grow tube wall.  This starves the young tree, vine or plant of vital blue rays needed to help develop a strong root mass that will assist in developing stronger stems and trunks.  By allowing the proper balance of light waves to penetrate the grow tube wall like any tree or vine would receive in an uncontrolled setting, like in full natural sunlight, allows young roots to develop more naturally into surrounding soils during the critical early stages of biological transition.

The illustration below demonstrates why blue light is important to plants. Shown on the left is white light passing through a prism. The light is broken up into a range of wavelengths from the 390 nm of violet to the 780 nm of red. This represents all the light potentially available to plants. 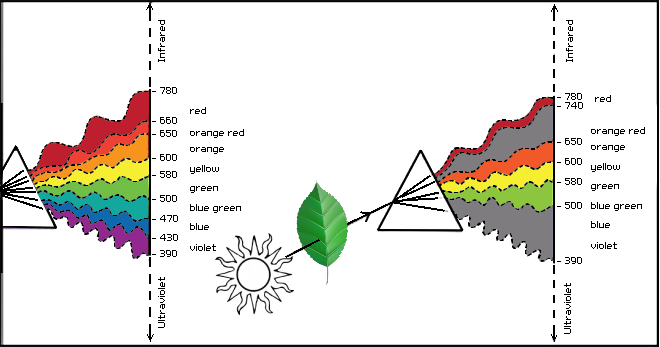 On the right, sunlight is shown passing through a leaf placed in front of the prism. Behind the prism dark bands in the spectrum are revealed between 390 and 500 nm and between 650 and 740 nm, indicating that chlorophyll has absorbed light of these wavelengths. BLUE-X® takes advantage of this phenomenon by providing a higher ratio of blue light along with the right blend of red and far-red to accelerate early growth.

The second illustration represents the results of a study done in Germany comparing the light generated by BLUE-X® Shelters and white light (Weisse Folie). Between the spectrum numbers 300 to 530, and 680 plus, the light emitted from the BLUE-X® is greater. Conversely, the light least used by plants, between the spectrums of 530 and 650 is lower with BLUE-X®. 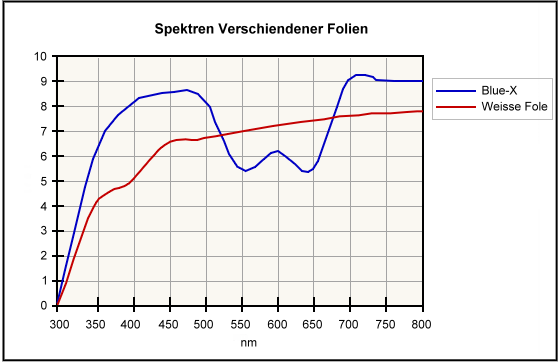 UV light is known to be harmful to plant growth and to damage DNA. BLUE-X® Shelters are designed to block transmission of a significant amount of this harmful UV light. Scientific evidence has also shown that blue light actually helps repair the damage caused by UV light.

Blue light is one of the main drivers of photosynthesis.  It stimulates chlorophyll more than any other color.  Plants depend on blue light for thick, green vegetative growth.  BLUE-X® is engineered to operate like a sophisticated greenhouse.  By allowing just the right balance of scattered Sun Light, CO2, Moisture & Temperature, BLUE-X® lets your tree, vine or plant thrive in optimal growing conditions to promote accelerated, balanced and sustained growth.  All the while protecting it from harmful sprays, wind and browse to develop a strong healthy self-supporting plant as nature intended.

BLUE-X® Grow Tubes have been forging the way in successful plantings for almost three decades.  We have been assisting growers in vineyard and orchard establishment, reforestation and woody plant establishment with 95 to 100% success rates since 1992.